I have deliberately been ignoring the internet for the last few days, desperately trying to steer away from anything connected with the new Deadpool film in the hopes of avoiding spoilers. Now that I’ve seen the film, I can cheerfully catch up on the comic and film news that I’ve missed since last week. 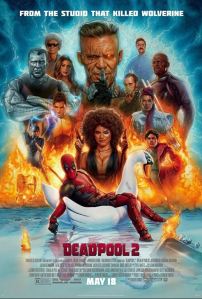 Oh, wait, I said there’d be a review in the post title, didn’t I?

Short review: It’s great. If you liked the first one, you’ll like this.

Slightly longer review: You may be a little disappointed that it’s not as groundbreaking and fresh as the first one, but come on, give the people a break.

Even longer review: There is not a dull moment in this film, seriously. The gags and violence are relentless, often hand in hand, and everybody involved does a damn fine job. From Reynolds as Deadpool, Brolin as Cable, through to Julian Dennison as Russell and the excellent Zazie Beetz as Domino, there’s not a duff cast member here. There are jokes, quips and Easter eggs galore, both visual and in the dialogue, and it’s probably worth a second watch at some point just to catch them all. The cameos are pretty much all laugh out loud funny but don’t burst into the story; if you catch them, they’re there, if not, it doesn’t matter.

And, surprisingly, there are several quite touching moments, too. It is, as Deadpool’s voiceover at the start says, a family movie and that means heart strings will be tugged at times you’re not expecting.

One of the trailers contained a scene where Deadpool and Weasel joke about there not being a Deadpool 3 but I hope there is; or, at least, an actual X-Force film.

If you haven’t seen it yet, go and do so – oh, and hang around for the mid-credits scenes where Deadpool rights some cinematic wrongs.

This definitely gets four tiny new legged Lego Deadpools out of five. (Watch the film and you’ll get the reference)