I’ve never really been bothered about how much my comic collection is worth; the majority of my comics and trades are from the 1980s onwards and with the exception of a few titles here and there, most of them – I imagine – aren’t particularly valuable.

There are some exceptions – I’m working at getting complete runs of the Silver/Bronze Age JUSTICE LEAGUE OF AMERICA and GREEN LANTERN series and am on my way; currently 213 out of 261 for JLoA and 158 out of 224 for GL. Scattered amongst them are a handful of rare or key comics in varying degrees of condition. For example, I have issues #21 and #22 of JLoA that feature the first team up of the Justice League and the Justice Society and the first use of “Crisis” as a motif to describe the threat to both worlds; I also have #85 of GL where Speedy was revealed to be a heroin user:

Those are actual scans of my comics and, as you can see, they’re in pretty good condition on the whole. It makes sense from a collector’s point of view for these issues to have a monetary value as they’re not only relatively rare but also feature key or important stories.

More modern comics might fetch a price if they’re the basis of a popular TV show or film, or if they feature important events from comic history such as PREACHER #1 or JUSTICE LEAGUE AMERICA #70:

Again, scans of my issues.

It makes sense to me that issues have value due to either their rarity and/or containing something significant in one way or another.

For the last fifteen years or so, I’ve used a comics database provided by the Collectorz.com company. It’s grown from being a fairly straightforward database to something much much larger – there’s an online master that you can download details from; there are mobile apps; even a web-based version so you don’t need to install anything; and the original software has long been customisable to one degree or another. I used to be one of the main suppliers of comic details such as creator credits and character appearances until they did away with the old forums and went solely to Facebook to interact with their customers – I’ve said before FB isn’t for me.

One of the things they’ve been great at is listening to customer feedback and improving the software as they go along and the latest release brings in something that many users have been asking for: automatic updates of the values of your collection. They’ve partnered with GoCollect.com and you can now download values for any comics that have been sold via auction sites.

It’s a nice, useful addition to the database, even for someone like me who’s never been concerned about the value of his comics. That said, once it’s in the database you can’t help look . . . which is why I’m writing this post. Not to brag that I have comics worth a couple of hundred quid but to offer up a word of caution and bafflement.

Like I said, significant and rare comics can easily command a good price, I understand that. But while my software now tells me that PREACHER #1 is worth $75, and JUSTICE LEAGUE AMERICA #70 is worth $10, I cannot for the life of me understand why this comic: 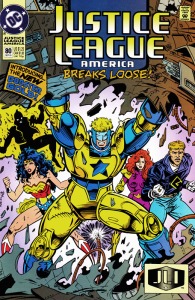 has apparently sold at auction for $80. Eighty dollars?! Why? For the return of Booster Gold in the worst outfit he’s ever worn?! The Dan Vado run on the JLA in the mid-90s had nothing notable in it apart from the death of Ice, and was followed by Gerard Jones who ran it into the ground about a year later.

A quick check at mycomicshop.com shows the issue currently priced at $1.70 which is what I’d expect.

Maybe it’s just my copy, huh? Maybe GoCollect and Collectorz.com are working together and have realised that my copy of JUSTICE LEAGUE AMERICA #80 contains a previously unseen page where an Easter egg has been laid that reveals the identity of Event Leviathan or something?

Maybe I should put it up for auction before anyone else realises . . .

Anyone have $80 they need to get rid of?

One thought on “The Value Of My Comic Collection”