Catching up with comic news, I came across this first look at the Dominators appearing in the Flash/Supergirl/Arrow/Legends of Tomorrow crossover.

There’s a few glimpses throughout the trailer and I snagged the following close-up (click to enlarge): 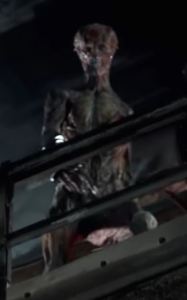 The bright yellow skin and large caste circles on their heads appear to have gone, not to mention the green robes, but they’ve still got those spiky teeth.

I’ve never really been a fan of Arrow but I think I’ll be tuning in to catch all the parts of this story.