The whole scantily clad fantasy thing is something I’ve never been able to get my head around – if you’re in a world of swords and daggers, put some bloody armour on!

This isn’t the first time Lady Mechanika’s commented on someone’s sartorial decision – she had a similar conversation with Lady Death way back in COEP Presents #139.

Aquaman and his Amnesty Bay friends deal with the monster that rose up at the end of the previous issue with some success, though that comes with a cost. Elsewhere, Black Manta enjoys the oversized underwater robot/sub that Luthor has given him to find a proto-Atlantean site beneath the waves.

Another so-so issue that looks good but plods along.

As Anti-God is about to arrive and destroy all of reality, Abraham Slam and the others have to make a desperate choice to save their world, and the result is something altogether new.

This is the final issue of AGE OF DOOM and while I know there’s the promise of a new mini-series soon (SKULLDIGGER) I wonder if we’ll see the original team again?

Split across two timelines, half the Justice League aid the Justice Society in World War II, while the other half help Kamandi and Justice Legion A fight against Brainiac. Alongside that, Lex Luthor and Perpetua scheme for the end of the multiverse only to be surprised by the arrival of the Anti-Monitor.

It’s another roller coaster, don’t stop to pause, reality’s breaking issue. I was more intrigued by the multiple mentions of Hypertime and the connection that Jay Garrick and Barry Allen felt for each other, as well as the future Starman for the League – clearly some of these characters know they’ve met before somehow.

Lady Mechanika faces off against La Madrina before finding out a little more about her adversary and her own connection to her via La Dama de la Muerte. And, at the end of the issue, Mechanika comes face to face with La Reina Roja . . . the Red Queen.

The call back to the previous miniseries was a welcome surprise and the monsters that Mechnika faces are wonderfully designed. Another splendid issue. 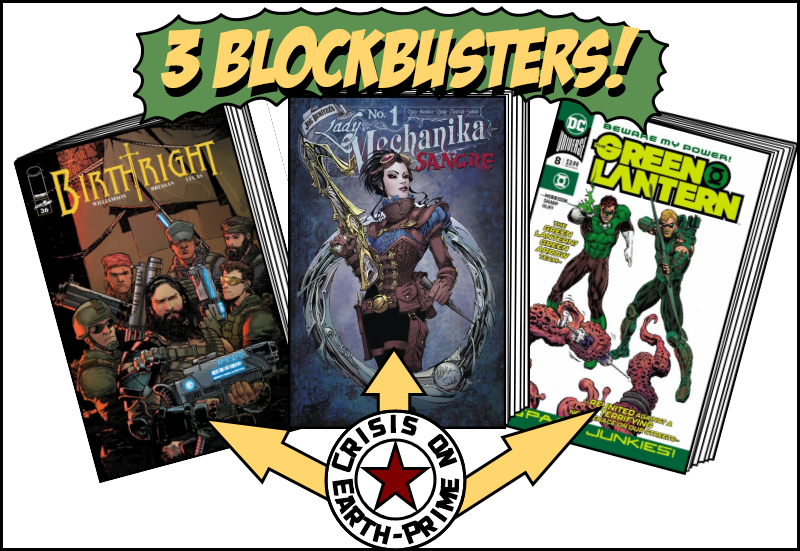 Sure, there’s only three books in the picture, but it was a bumper week:

Captured by the government, Mikey and his family learn the truth about how much the world really knows about magic and how it’s preparing for the inevitable clash between our world and that of Terrenos. And with the last page reveal, it seems that clash is coming a lot sooner than anyone thought.

Consistently one of the best looking comics I’ve ever read – and with the same team on it since day one which, these days, is kind of rare – BIRTHRIGHT takes a change of direction this issue, keeping things fresh but still in line with what’s gone before.

The mission comes to an end for the Black Hammer Squadron as enemies are confronted, civilians rescued and sacrifices made.

From one of the best looking comics to one of the worst. I think I’ve mentioned in each review of this series just how much the art of Matt Kindt doesn’t work for me. Maybe they were trying to evoke a simpler time? Maybe, but for me it just looks childish. Story-wise, then ending’s no real surprise and, maybe because of the art, it felt like something of a disappointment to me.

Green Lantern crashes at Green Arrow’s house and quickly gets involved in a case involving aliens trafficking in souls and giant extra-dimensional beings. All the while, there’s a hitman who’s been hired to wipe out the entire Earth.

This issue is clearly Grant Morrison having fun with some wacky Silver Age nonsense that nobody but him remembers, but for me it didn’t really work. Less because of the inclusion of Xeen Arrow, but more because of the relationship between Arrow and Lantern; Morrison is clearly playing in a sandbox where the 60s and 70s stories happened, Hal and Ollie are old friends who did the tour of America and became relevant for a while, and Ollie at least is easily in his 40s. And all of that jars with the current timeline. This issue felt like fan fiction where Morrison has a story to tell and to hell with anything else that’s happened between 1958 and now. I’ve enjoyed this series up till now, but this issue . . . not so much.

The League fight back against the World Forger and his League led by their own Batman who, it turns out, gave Superman a way out of his prison just in time to get him back to the League in order to defeat the Forger. Striking a deal with the Forger, the League take him back to Earth where they find they’re too late – Luthor and his Legion of Doom saved the world and have made an offer to the villains of the world, giving them whatever they need to take over the world.

This issue’s big and bombastic – Superman’s return is handled really well – but it mostly feels like padding. Sure, there’s mention of the Source Wall collapsing and the Multiverse rushing towards it’s doom, but it just feels like set-up for the Year of the Villain event that’s coming up in the next few months. Still, the art looks nice.

After a flashback to 500 years ago in Mexico, we’re back with Lady Mechanika who has been called to Spain to help solve the case of a seemingly possessed young man, Alejandro, who’s parents have wildly different ways of dealing with the situation. His overbearing father Pedro is insistent that the church can save Alejandro, while Leonora, his mother, has called in Lady Mechanika. After speaking with the house servants, Mechanika doubts if there is even a case to solve, though her mind is changed by issue’s end.

Another good start to the latest Lady Mechanika tale; Joe Benitez seems to be easing back on the art but Brian Ching’s work is just as lovely to look at.

Kalfu and Abigail meet with the Buzzard Clan to try and find why Henry has gone missing and just where he has gone. Henry has managed to visit India, with his friend Barry following him, and manages to track down his mother.

This issue had more background, more information and so felt bigger after the last few issues which seemed to sprawl a little. As such, it was more enjoyable than those.

Billy and Mary set out to rescue the other members of the family, while Dr Sivana and Black Adam battle it out at the Rock of Eternity. Trying to enter one of the other realms, Billy and Mary are instead sent back home where Billy finds his birth father has returned and is on parole. Pedro and Eugene meet the wizard Shazam, and while King Kid plans a war against Earth, Mary confesses to her adoptive parents that she and the others are superheroes.

Another good issue with various pieces being put in place for the showdown that’s coming.

Join 81 other subscribers
Follow Crisis on Earth-Prime on WordPress.com