Hey look at that, a post which isn’t a Mash-Up.

Still crazy busy in work, still struggling to move house but decided to switch things up and actually write about something for a change: October’s solicitations.

It’s been 35 years since Ozymandias dropped a giant interdimensional squid on New York City, killing thousands and destroying the public’s trust in heroes once and for all. And since that time, one figure in a fedora, mask, and trenchcoat has become a divisive culture icon.

Nope – big, hard pass from me here due to it being written by Tom King. Everyone raved about his OMEGA MEN but I still have issues over Kyle Rayner suddenly becoming a devout Catholic, and the less said about HEROES IN CRISIS the better.

The final chapter of the most terrifying and personal Batman mystery is here!

Still reeling from their last encounter with the three Jokers, Batman, Batgirl, and Red Hood discover the terrible truth about the Three Jokers’ plot. Will the caped crusaders have the strength needed to put an end to the maniacal menaces’ master plan once and for all, or will it be lights out for good?

The first issue hasn’t hit yet, but I have to admit to being really interested in this. I like Johns’s work on the whole and with Jason Fabok channelling his inner Brian Bolland, I can’t wait for this.

The Justice League’s intergalactic team of Green Lantern Jessica Cruz, Orion of the New Gods, Red Lantern Dex-Starr, and New Teen Titans Starfire and Cyborg make a final stand against Darkseid in a battle that reshapes the cosmic landscape across every sector of space!

The final issue of this series – honestly, it lasted longer than I think most people expected. A mostly pretty good, self-contained title helmed for the most part by Dan Abnett.

The last survivors of the Multiverse live among us under new, superheroic identities, five survivors of doomed worlds…taking a second chance to ensure our world lives on. A new twist on strange superhero comics, with a bleeding-edge eye on the modern moment, COMMANDERS IN CRISIS follows in the footsteps of Doom Patrol and Thunderbolts as five unexpected heroes come together to solve a murder unlike any other. The victim? Compassion itself…This is ideacide!

Wacky space adventurer Colonel Randall Weird leaves Black Hammer farm and embarks on a strange journey through space and time for something that he’s long forgotten with his sanity and life at stake!

Delayed by the coronavirus lock-down, I’m glad to see this mini-series tied with the BLACK HAMMER universe is finally getting released.

That’s it for new series/ones that are finishing that I’m interested in. There’s a ton of DEATH METAL tie ins which I’m just not bothering with; the one exception is September’s multiversal themed one-shot which I’m picking up but apart from that it just doesn’t grab me.

Oh and while it’s not a solicitation as such, there was this in the horrible, clunky, digital only DC Connect catalogue:

I wonder if this is what Robert Venditti left JUSTICE LEAGUE to write?

I’ve had a fondness for Adam Strange – he’s one of those classic characters that seems to keep popping up and while there’s a few tweaks to his appearance, most of the time you can rest assured that it’s still Adam Strange.

Sadly, the solicit for STRANGE ADVENTURES starring Mr Strange doesn’t really grab me. I didn’t read MR MIRACLE by Tom King, but I did try HEROES IN CRISIS and ditched it after the second issue; I’ve also read his OMEGA MEN story and have problems with his characterisation of Kyle Rayner so this new series by King wasn’t exactly going to be at the top of my list, but this bit in the solicit made my mind up:

A story like no other, Strange Adventures is an ambitious, thrilling, shocking, and beautiful 12-issue saga that will push Adam Strange to the breaking point—and beyond!

Another hero that needs to be pushed and broken, eh? No thanks.

AQUAMAN #58 – “Mera lies comatose following the birth of her child” – because Cthulhu forbid anyone has a normal delivery.

THE GREEN LANTERN SEASON TWO #2 – “But when an invasion from the dawn of time strikes the planet, can Hal stop…the Ornitho-Men?!” – I’m assuming someone’s already tracked down the obscure 1960s issue of GREEN LANTERN that first featured these guys?

And the woman in the cage – is that Olivia Reynolds back in the pages of GL?

JUSTICE LEAGUE DARK #21 – “Wonder Woman, Detective Chimp, and special guest star Animal Man fend off a horde of monstrous Rot-infected creatures—but risk contamination with every soul they save!” I remember the Rot from the New 52’s SWAMP THING and ANIMAL MAN crossover and how slowly that story progressed. Hopefully things will be better in JLD.

THE TERRIFICS #26 – “A bold new direction for The Terrifics begins here!” – words that always make me twitchy, but at least this new direction is being written by current TERRIFICS writer Gene Luen Yang who has ably continued the run started by Jeff Lemire.

Outside of those and the handful of other ongoings I get, there’s nothing there to tempt me.

What the hell is going on here? I read DC’s September 2019 solicitations on the weekend and found this: 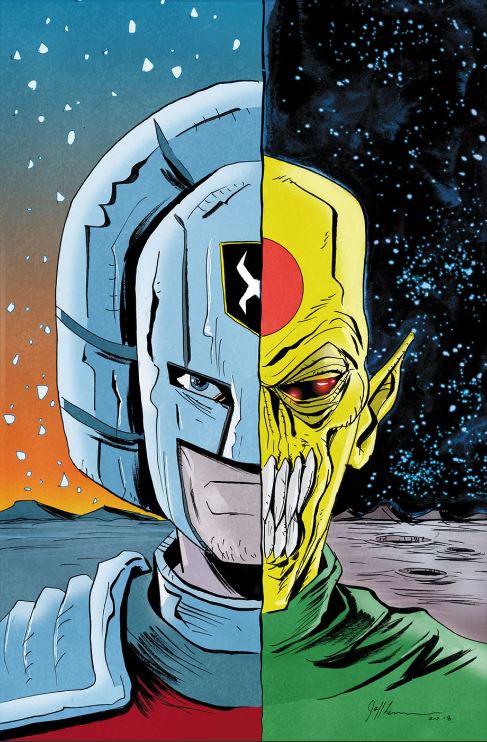 INFERIOR FIVE #1
written by KEITH GIFFEN and JEFF LEMIRE
art and cover by KEITH GIFFEN and MICHELLE DELECKI
backup story written by JEFF LEMIRE
backup story art by JEFF LEMIRE
variant cover by JEFF LEMIRE
The citizens of Dangerfield, Arizona, are beset by strange goings-on after the “Invasion” that rocked the DC Universe, but only five misfit kids seem to notice them. Can they uncover what’s happening before some sinister force collects them all? Find out in this new miniseries!
And in the backup feature with story and art by Jeff Lemire, the Peacemaker is on a top-secret mission from Checkmate and Amanda Waller to find a mysterious weapon before the Russians can.

Not only is this a new 12 issue limited series by Keith Giffen and Jeff Lemire (two of my favourite writers) but it’s a tie-in to the INVASION! series that Giffen wrote in the late 80s! A crossover thirty years in the making, people!

Man, I really need to finish the INVASION! annotations . . .

New DC December solicitations are out and the two covers of Doomsday Clock #2 are revealed: 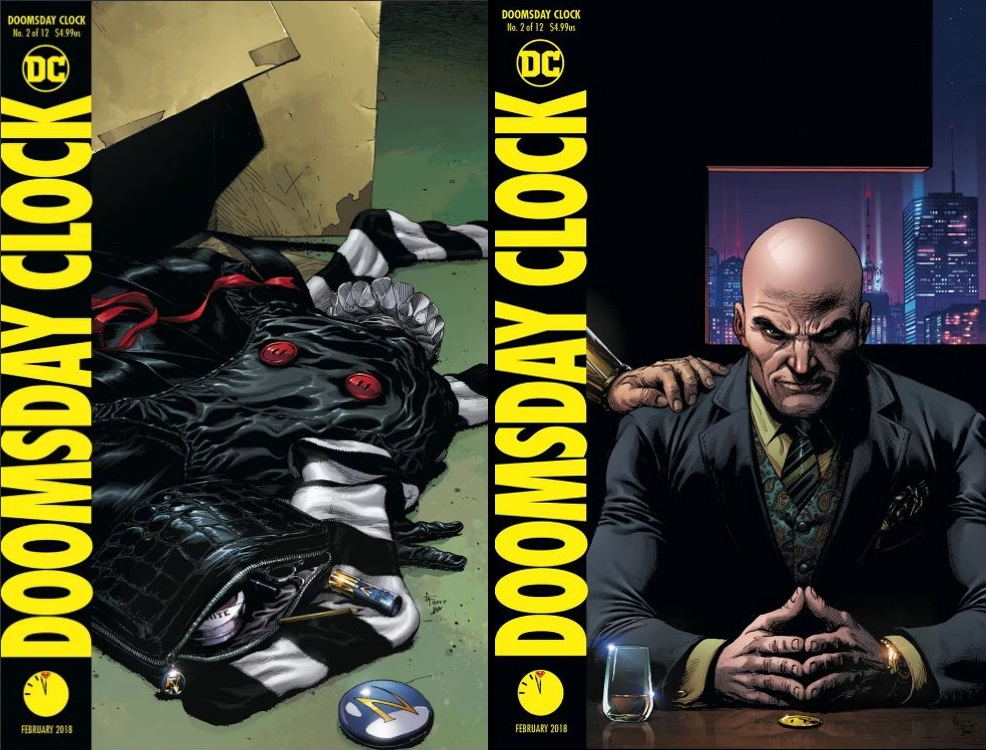 I’m not recognising the costume on the left – the black and white socks/leggings, the black corset with the red buttons and frilled collar. The only things that’s springing to mind is the Harlequin but I’m not convinced. The Nostalgia bottles and case in the bag labelled ….NITE aren’t clues either.

But on the left, his hand resting on Lex’s right shoulder? That’s clearly the armband of Ozymandias and as the solicitation says

it seems likely that at least one other Watchmen character besides Dr Manhattan is making their way to the DCU. Which makes me wonder if this bit of the solicitation:

And killer clowns trek through Gotham seeking a madman.

is referring to Rorschach – is he the madman?