When Hal Jordan was revealed as the new Spectre in DAY OF JUDGMENT, I was both intrigued and a little cautious. I’d been a fan of both characters for years and it seemed like this was an interesting take, using Jordan’s experience as Green Lantern to fuel the Spectre’s thirst for vengeance. The series that eventually spun out of that idea, though, took things in a different direction, and Hal ended up becoming the Spirit of Redemption, which sort of made sense for his character, but was wildly different for the Spectre.

Issue #20 of THE SPECTRE finds Hal visiting (I don’t want to say haunting) someone who believes he has the perfect life.

We get little snippets of that perfect life as Robert enjoys a great marriage, a lovely young son, a good job, all he could ever wish for. Bit by bit, though, the facade falls away as the Spectre intrudes on his world, forcing him to face up to the fact that things aren’t what they seem, though Robert fights against him.

Eventually, though, the Spectre has no choice but to step in and confront Robert with the truth that his life was not perfect, although he had made the best of himself. Born poor, his mother dying when he was young, leaving him with an abusive, alcoholic father, Robert had grown and done well, getting the wife and son, the loving family he dreamed of. Unfortunately, he fell.

And then he died. And kept living his perfect life over and over again in some form of limbo state which prevented him from “moving on” which is where the Spectre came in.

With the Spectre’s help, Robert’s able to move to the next phase of his existence – the next deep dream – in Heaven, while the Spectre returns to Earth to continue his mission.

It’s a nicely done in one story, with lovely art from Norm Breyfogle, Denis Janke, and Guy Major, but for me it suffers from the same things this series did: the recasting of the Spirit of Vengeance as one of Redemption; and the slightly trite “everything’s going to work out as we all go to heaven” message. It’s a nice comforting thought, but it’s not one I agree with, and that tempered my enjoyment of the series.

As much as I liked the idea of Hal Jordan coming back as the Spectre post-DAY OF JUDGMENT, the ensuing storyline of him being the spirit of redemption didn’t work for me. I guess I like my ghosts vengeful and extreme, and the Hal stories didn’t match up to the excellent John Ostrander/Tom Mandrake series.

Looks like the Challengers are in some trouble now that the Spectre’s got a hold of them.

Or maybe not, considering this is the Hal Jordan version of the Spectre. 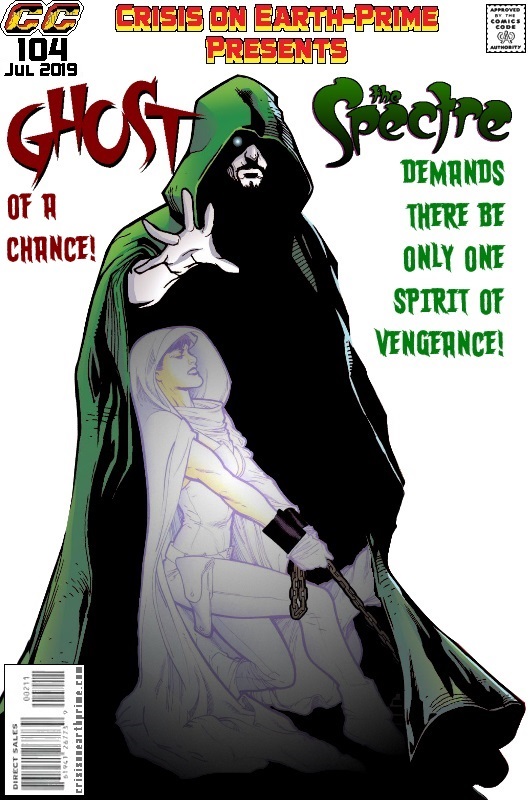 Ghost did a crossover with the Cassandra Cain Batgirl back in 2000 but I think a better suited combination would have been her up against the Spectre.

Join 79 other followers
Follow Crisis on Earth-Prime on WordPress.com