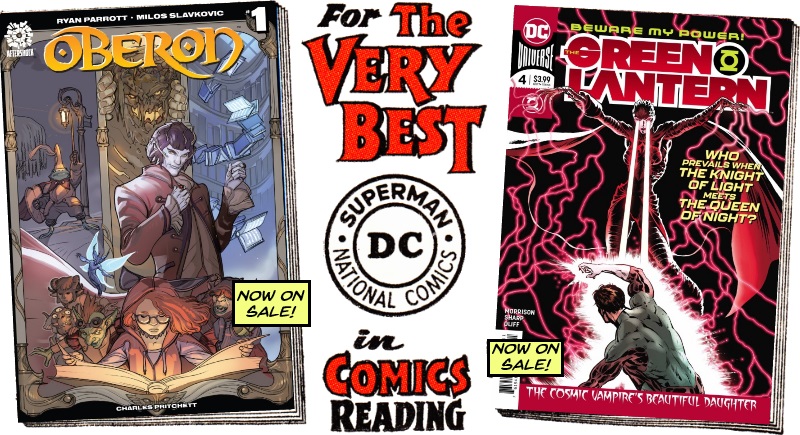 Hal Jordan is held accountable for the (let’s face it) murder of a prisoner in the previous issue and is placed under house arrest by the Guardians. At the same time, a mysterious four armed stranger chats with an equally mysterious woman as he tries to find a way to join the Black Stars, both of them swapping stories of Sun Eaters. Turns out the stranger is actually Jordan, presumably post escaping house arrest, and the woman is the Countess Belzebeth, the titular “Cosmic Vampire’s Beautiful Daughter.”

Morrison’s run on GREEN LANTERN continues to be interesting, with lush art by Liam Sharp. The non-linear storytelling works a treat, even if it was obvious from the start that Jordan was the stranger, and I’m guessing Belzebeth’s dad is long-time Justice League foe Starbreaker. Have to admit I’m curious as to who the “wrong man . . . from the Inside-Out” is, though, that Belzebeth finds earlier in the tale.

After the epic events of last week’s JUSTICE LEAGUE ANNUAL, we get a slower, more nuanced tale of Martian Manhunter meeting with Lex Luthor on Mars. J’onn tells Lex a tale of his own childhood which he has recently recovered, a tale where, it turns out, a young Lex and he knew each other and were friends. J’onn appeals to that lost memory within Luthor in the hopes of getting him to stop the Legion of Doom’s plans but, by issue’s end, it’s uncertain how successful he’s been.

A nice character piece, the repressed memory trope notwithstanding, and a nice change from the manic pace of this title.

Oberon, King of the Fairies, has lost his throne, betrayed by someone he loves, and the key to reclaiming it is Bonnie Blair, a precocious young girl who is sharp as a knife and knows a lot about pretty much everything. Engineering an attack on her, Oberon is able to save her, tell her that her parents are not who she thinks they are, and that he is her friend. With her back home, the truth is revealed and, at her invitation, Oberon is able to rescue her from her not-parents and whisk her away to safety, leaving her not-parents to contact Titania.

I’m so glad I took a chance on this – I think I picked it up based on the strength of a couple of preview pages in another Aftershock title. The writing is crisp and to the point, a little like early Neil Gaiman before he became florrid and over-written. And the art is absolutely gorgeous. Well worth picking up.

Mostly back story on Abigail Redmayne, we get to understand how the world of SHADOW ROADS is connected to, and grew from, the world of THE SIXTH GUN, and her interrogation of the recently captured Hunter. Meanwhile, Anton of the Black Stars (not the ones mentioned above in GREEN LANTERN!) and his friends head off to see a warlock that the Hunter contacted before he was captured.

It took a while to settle into its stride, but this is working well.