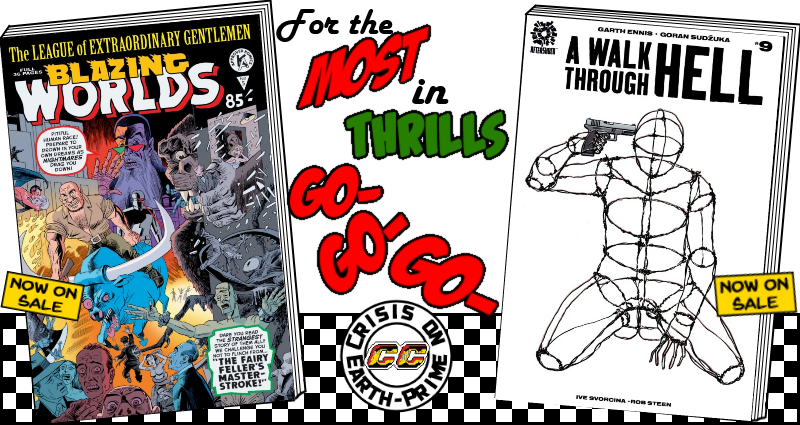 A WALK THROUGH HELL #9

Man, just when you think you know what’s coming next, this series pulls the rug out from under you again! There’s not a great deal I can say about the plot other than to reiterate just how good this book is. If you like well paced, thoughtful horror, you’ll like this.

THE LEAGUE OF EXTRAORDINARY GENTLEMEN #5

Prospero launches the attack of the fairy world against mankind and all hell breaks loose. At the same time, Moriarty is still trying to track down the League, while Mina and her allies are looking for some way to prevent the end of the world.

It’s a chaotic, Easter-egg filled issue as you’d expect and it’s all building to the next and final issue. After which I’ll probably re-read the whole thing again to work out what the hell’s going on.

Mr Terrific and Ms Terrific (of Earth-23) try a couple of dates to see if they’re compatible with each other, while the rest of the team end up fighting virtual soldiers from a training simulation Stagg Industries have whipped up. Along the way, the team are told someone is coming and, at the end of the issue, they realise they’ve been dealing with manifestations of the Biblical Ten Plagues of Egypt.

Gene Luen Yang takes over the writing with this issue and it’s almost seamless from Lemire’s work – it’s fun and engaging, just what I like.