This is what all the Monday Crises over the past few weeks have been building to – a throw down between the various versions of the Anti-Monitor: Sinestro Corps guardian, original, and Darkseid War version.

And a battle this big needed a double sized issue! 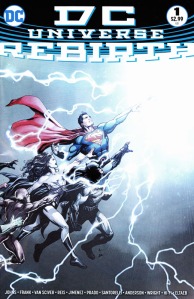 DC’s recent Rebirth one shot has garnered a lot of positive talk: the story’s good, it sets up a lot of future story lines, reintroduces a sense of hope to the previously tired and grim New 52 and – most surprisingly – introduced the Watchmen universe into the main DCU . . . or at least sowed the seeds of it.

Much has been made of the identity of the person who played with the DCU’s timeline and stole 10 years from it; the same person who seems to have infused that sense of dark, grim, hopelessness that’s been prevalent in DC comics for many years – since before the New 52 if we’re honest. It seems almost a given that the culprit is Dr Manhattan from Watchmen and, given his detachment from humanity, it’s likely that his meddling was done from a sense of curiosity rather than outright malice. However, one or two years down the line, that won’t stop him being the villain of the piece when the heroes of the DCU inevitably try to hold him to account.

It may be tempting to say that Superman, Batman, Wonder Woman and the others will team up and defeat him but knowing Geoff Johns – who wrote Rebirth – the final blow will come from an unexpected source.

Johns has made something of a career taking villains and using them in unusual ways – his run on The Flash gave the Rogues (Captain Cold, Heat Wave, etc) almost as much of a starring role as the speedster himself and while they were clearly villains, you couldn’t help but sympathise with them. In the pages of Green Lantern, he took Sinestro, the mustachioed one dimensional arch-enemy of Hal Jordan, and turned him back into one of the best Green Lanterns without negating the character’s previous history. In Forever Evil, it was Lex Luthor and his band of criminals who saved the world, not the Justice League.

Most recently, he’s used the Anti-Monitor in Justice League, revealing that the character’s name is Mobius, that he was the original owner of Metron’s Mobius Chair (hence the name), and that he stood in opposition to Darkseid. He’s used the character before: briefly in Infinite Crisis (although the character was a corpse at the time) but then in the Sinestro Corps War storyline in Green Lantern, then in Blackest Night before bringing him into the New 52 as Mobius.

Mobius’s title – the Anti-Monitor – isn’t explained in the post-Crisis DCU: in Crisis on Infinite Earths, we have the Monitor and his counterpart, the Anti-Monitor, which is straightforward, if a little unimaginative. But in the post-New 52 DCU (and especially since Convergence negated the original Crisis somehow) there’s been no hint of a Monitor to whom Mobius can be the opposite/counterpart – he’s an Anti with no Pro.

Which brings me back to Rebirth and the revelation from Wally West that someone is watching the DCU, someone is literally a Watchman and everything points to that being Dr Manhattan.

When the DCU heroes finally take him on, it wouldn’t surprise me – as I mentioned above – if they get some help and, this being Geoff Johns with his affinity for doing something different with bad guys, my guess is that this help is going to come from the Anti-Monitor. Sure, at the end of the Darkseid War in Justice League he’s currently dead, but when has that stopped anyone, including the Anti-Monitor himself?

I think the Anti-Monitor’s going to end up going up against Dr Manhattan who, as Rebirth strongly suggests, is watching the DCU. The Anti-Monitor needs someone to be Anti towards.

And what is someone who watches . . . if not a Monitor?

Honestly, it’s always baffled me why DC release their solicits in about five or six different posts; thank goodness Newsarama habitually collate them all into one. Here’s December’s; let’s see what we’ve got, eh?

Harley’s Little Black Book #1 – not something I’ll be picking up monthly, but will probably grab in the trade; long been a fan of Palmiotti’s writing and Conner’s art is never less than gorgeous.

Justice League #47 – I’m enjoying the Darkseid War storyline so far and the use of the Anti-Monitor and the Crime Syndicate is always a plus.

Earth 2: Society #7 – the solicitation mentions Dr Impossible – is that Jimmy Olsen on the cover and is he Dr Impossible?

Secret Six #9 – if I wasn’t already getting (and thoroughly enjoying) this title, the solicit of “The team’s attempt to defend the Earth from invasion by the Elder Gods takes them to a creepy New England town, inhabited by one very nasty creature.” Secret Six vs Elder Gods? Sold!

Green Lantern #47 – Sonar’s back! What do you think, Bito Wladen or the guy from Kyle Rayner’s run with metal sticking out of him? My money’s on Bito.

And conspicuous by its absence is Green Lantern: The Lost Army #7 which should be out in December. Another title biting the dust?

The above isn’t everything I’m getting (there’s Aquaman and Justice League of America for example) but that’s what caught my eye.