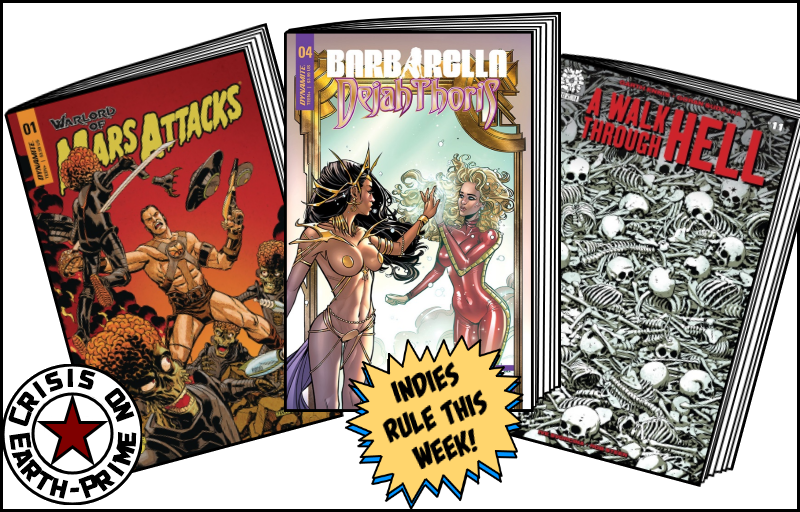 Arthur finally gets his memories of Mera back, but they come with a twist – not only did she reveal her pregnancy to him, but his reaction (of wanting to slink off and think about things for a while) pissed her off so much that it looks like she flipped and accidentally killed him. That was the incident that meant him waking up without memories on the island of the old sea gods.

I’m in two minds about this series since DeConnick took over; it’s well written and the art’s usually good, but the whole amnesia/my wife’s pregnant story line just feels too familiar. How many times have we seen/read a scene where – DUN DUN DUUUUHHHH – the woman says “I’m pregnant!” in order to provide a plot point for the man? This, combined with the amnesia, just seems lazy.

The two heroines from different times work together to save the inhabitants of a water-filled Mars, sending them back through time to become their own ancestors and, along the way, ensuring the rise of the Red, Green and all the other Martians, of which Dejah is one.

This has a been a fun series; I’ve not encountered Leah Williams’s work before but this makes me want to track some more down. It’ll probably be collected at some point, and you could do worse than picking this up.

As Martian Manhunter scans the Earth for Lex Luthor, many of the other Leaguers head to the House of Heroes where heroes from the multiverse have gathered to hear Superman and the World Forger ask for help in finding the Monitor and the Anti-Monitor. Meanwhile, Hawkgirl and Mera set about training new heroes while Starman is trying to find the other pieces of the Totality.

This was slower paced than recent episodes, perhaps because James Tynion IV is writing rather than Scott Snyder, but there’s still the whole “the multiverse is dying!” thing which has been going on since forever. As much as I liked seeing the other heroes from the multiverse, this has been dragging on for such a long time now.

We get glimpses of Shaw’s past, while in the present McGregor acts as Shaw’s guide in hell (or wherever they are) showing her what has happened to the agents who went before them, as well as Driscoll who reveals her own, mostly unwilling, part in this whole thing.

Man . . . one issue to go and I have no idea where or how this is going to end, but I’m suspecting something dark and nihilistic.

The Martians from Mars Attacks – Moonheads as they’re called here – are in full-on attack mode, invading Helium and the other Barsoomian cities. Despite John Carter’s best attempts, the Moonheads are winning, forcing Dejah Thoris to sacrifice herself and Helium, destroying the entire city and most of the Moonheads in one huge explosion. Years later, on Earth, NASA celebrates the successful landing of a craft on Mars but no sooner do the pictures reach Earth than we see Moonheads destroying the landing craft. At the same time, somehow, they attack Earth in their flying saucers. The issue ends with one of the NASA scientists taking a handful of hostages toward Arizona.

I mentioned this when it was solicited back in March and, sure enough, it’s a 100mph ride that doesn’t let up. It’s fun and probably not going to be too serious for the rest of the mini-series so I’m glad I picked it up. 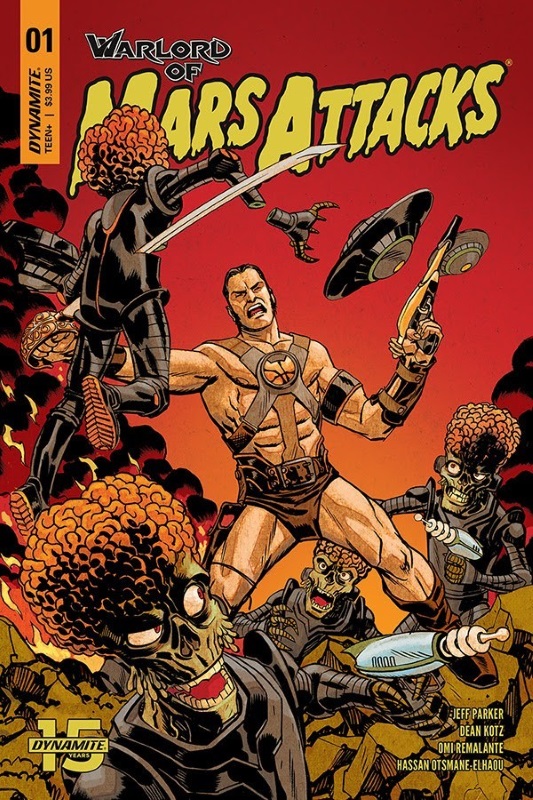 And, as I like a bit of Edgar Rice Burroughs’s Martian Warlord (more so than those chattering, big brained guys) I’m tempted to pick this up in a couple of months.

Back on my old blog, I ran a series of related posts on Mondays and I’ve been wanting to do something along those lines here.

So, and I admit to being HUGELY influenced by the wonderful Super-Team Family blog which has been doing this for years (and a lot better) on an almost daily basis, I’ve mashed up a few comic covers.

Each week I randomly generate two years and two months and then compare the titles I own from both those dates, trying to find some covers that, with a little basic photoshopping, I can mash together, and then I force the results on you lovely people. 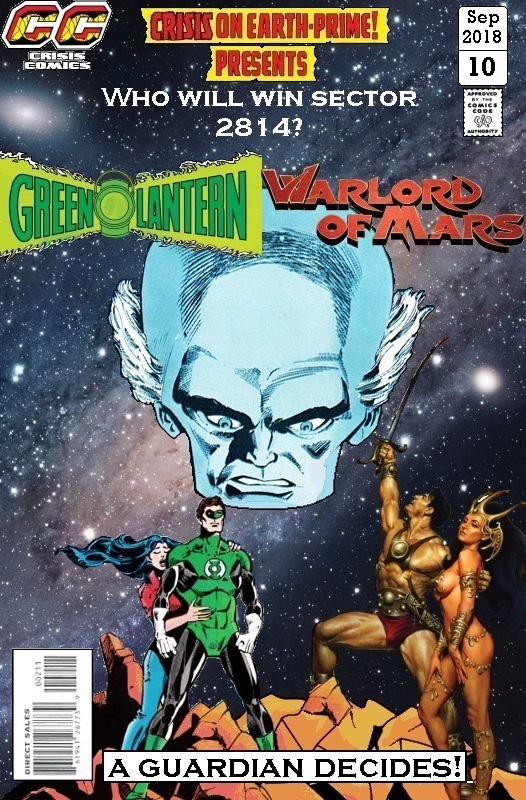 Okay, I will hold my hand up – the Super-Team Family blog influence is now in full effect.

The last mash-ups I’ve done have all taken one or more characters and inserted them into the cover of another series; it took me nine attempts to work out that Ross over at Super-Team Family is actually creating his own covers by combining the characters into something new, not an existing cover. I hope he and any of his readers that happen to see this and the following mash-ups as respectful homages.

Who would you rather see as the new Green Lantern? Hal Jordan or John Carter? Hell, why not Carol Ferris or Dejah Thoris? 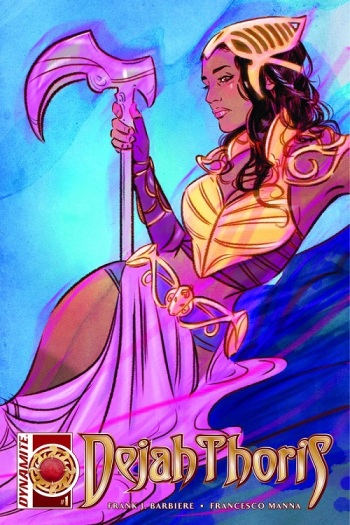 I mentioned before about a new Dejah Thoris title coming from Dynamite and in this interview with Gail Simone we get confirmation that it’s landing in February and also a little more information about it:

We gave Dejah a whole new story here. It’s in continuity, she’s not a different character, but she’s forced to put away everything and everyone she knows, and go live incognito as an entry-level soldier in the middle of nowhere. Of all the story directions, this is the one I think could be a real game-changer for the character. What happens when a princess who has everything, has to leave it all behind, even her name, in shame? To go fight a border war in a desolate land?

The fact that it’s “in continuity” is interesting and leads me to wonder what effect that will have on the John Carter: Warlord of Mars series that I’m also reading – is that story going to reflect Dejah’s apparent disappearance from Helium and if so, how’s that going to affect Carter?

Interesting times ahead, I think.