John Carter might have a fight on his hands here – Peter Cannon was already a martial artist and now on Mars, he gains super strength as well.

Uh-oh, looks like Dejah Thoris’s quest for vengeance from #208 didn’t go so well.

“Inconceivable! That was half our fleet!”

“Surely we don’t think some omnipotent being snapped his fingers and half our people ceased to exist? HAHAHAHA!”

The Moonheads, dealing with a sudden fall in their numbers

The torture of the captured Human Bomb and Doll Woman continue, while Uncle Sam and Phantom Lady have to moderate their plan of attack due to Black Condor’s actions. Supposedly in Detroit for a covert mission, he ends up leading a full on rebellion against the Nazis with surprising results.

Another good issue that enters into the final arc; it’s going to be a blast between now and #12, the final issue.

Alive to the threat of Circe, Wonder Woman enlists Zatanna and Kent Nelson to help her access the Witchmark powers from last year’s The Witching Hour storyline; that means using Eclipso’s black diamond. Meanwhile Swamp Thing tries to reconnect with the green only to be defeated by Floronic Man, and Man-Bat goes nuts following his encounter with the Otherkind last issue.

Another cracking issue – tons of stuff happening, along with throwaway references to mystical artefacts like the Spear of Destiny and the Ace of Winchesters, and it all looks gorgeous as well.

Billy sets off to try and find the other members of the Shazam! family; Pedro and Eugene are stuck in what appears to be an amalgamation of Oz and Wonderland, while Darla and Freddie are rescued by Tawky Tawny only to end up in the Darklands, just like Billy.

Plagued by delays, this title is still entertaining when it arrives. I couldn’t help but notice it’s taken these seven issues before there’s even a hint that it’s taking place within the main DCU as Mary Marvel plans to head off and find the Justice League to enlist Wonder Woman’s help. The next issue blurb of “Shazam meets… Captain Marvel?!” sounds intriguing.

The Terribles faces of against the Terrifics and win, finding the power source they need to start up their time machine. They need more, however, which means a threat to Phantom Girl’s home planet, but before that, the Terrifics have to contend with being warped back to the 90s and then the 80s!

Honestly, I’ve never been a fan of Bizarro and the forced backwards speech that always reads inconsistently, but I can ignore than when the rest of this issue is so much fun.

John Carter finally makes it back to Barsoom, but so do the Moonheads – though half of them promptly vanish thanks to the quantum-flux state of the planet. The remainder are attacked by the Heliumites and the Tharks, led of course by Dejah Thoris and Tars Tarkas, all of which leads to the final confrontation in the next issue.

Still enjoying this – it’s very silly and charges along at a good pace and is clearly having fun with itself. 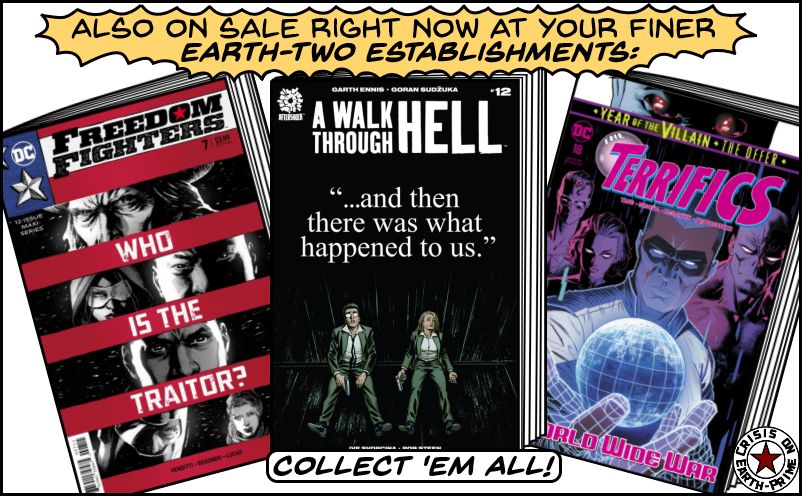 Away last weekend so no reviews; back now, though.

The Fighters hold out with a sympathetic family but they’re betrayed by the father who calls for the Plasstic Men. Phantom Lady manages to kill a number of the rubbery Gestapo types, allowing the Fighters to escape but, unknown to them, one of the Plasstic Men has disguised himself as Doll Woman and is now embedded in the team.

Another solid issue, thankfully unencumbered by the ongoing Year of the Villain event that’s being shoe-horned into almost every other DC title at the moment.

Kent Nelson tells of the origin of Dr Fate and Nabu and how, after everything Nabu made him do over the years, he’ll never become Dr Fate again, nor will Khalid Nassour. Zatanna confronts John Constantine about his part in her father’s grand plan and doesn’t much like the answers. And as the Year of the Villain event rolls on, Lex Luthor turns up to ask Circe to set up an Injustice League Dark.

Another good issue although I missed the pencils of Alvaro Martinez Bueno; I only hope he’s taking a rest and will be back soon.

As some of the team gather up the mini-Plastic Men that represent Eel’s sins before forcing him to reintegrate, Mr Terrific manages to get in to the Noosphere and strike a deal, a result that Ms Terrific isn’t happy with, ending in her breaking off any chance of a romantic hook-up between them. At the end, Lex Luthor manages to send one of his probes to Earth-29 where he recruits Bizarro to destry the Terrifics.

Not a bad issue, though the ethical dilemma of what Mr Terrific has done doesn’t get enough room to breathe here, making Ms Terrific’s unhappiness seem a little out of place.

Garth Ennis’s horror story comes to an end with a final issue that is as horrible, nihilistic and inevitable as you’d imagine. There’s commentary about the world today, and America in particular, but over and above that, there’s a grim indictment of humanity as a whole. We’re all screwed, Ennis’s characters say, and it’s all our fault. I mentioned last month that I was expecting “something dark and nihilistic” and I wasn’t wrong.

This has been an excellent series and ends in the only way possible, as much as you might not like it.

The Moonheads from Mars continue their attack on Earth while Dr Norman and his compatriots head to an abandoned mine where Norma reveals all – he’s the great grandson of Edgar Rice Burroughs and everything Burroughs wrote about John Carter of Mars was true. He explains a theory about the quantum state of Mars, how when viewed from one vantage point it’s a lifeless planet, but when viewed from another – as John Carter had – the place was full of civilisations. Norman had created the Insight Lander that landed on Mars in the previous issue to show the world the wonders of Barsoom . . . but found the Moonheads instead. And, finally, he reveals the body of John Carter in the mine as well, just waiting for the right time to wake up . . . which happens to be at the end of the issue, saving Norman and the others from the Moonheads.

It’s silly and fun and rattles along at a good pace. Still happy I took a punt on this.