Been out the last couple of days so catching up with the news and here’s what caught my eye:

Ash vs Evil Dead has been confirmed for a second season before the first one even starts – which is great news for you lovely people in the States, but over here in the UK, there’s still no channel confirmed to show it. 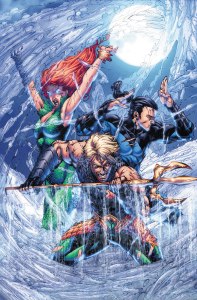 Cullen Bunn is leaving Aquaman as of #48 and, honestly, I won’t be too sad to see someone else take over. I really enjoy Bunn’s work on The Sixth Gun and Sinestro (both of which I pick up in trades) but for some reason, his work on Aquaman had kinda left me cold. It’s a shame, though, that he had to say this:

This was such a different take on the character, a lot of diehard Aquaman fans couldn’t accept it. I was accused of not talking about the book, but every time I did, I got hate tweets and hate mail.

I will never understand people who dish out hate over something as – frankly – insignificant as a comic book. Like I said, I’m not overly enjoying his run on Aquaman but there’s no need for the sort of reaction he’s received.

The Flash continues to be my favourite superhero show right now and this announcement just ensured that will continue, specifically:

And now we’re really going to pick up, with 5 and with 6 and 7, the Earth-2 storyline. There will be doppelgangers and doubles. 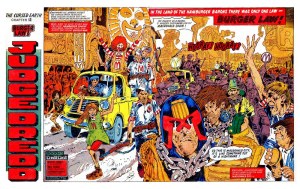 Judge Dredd gets to fight the Burgers Wars after nearly 40 years. I had the original issues (long since disappeared due to growing up, house moves and that sort of thing) and already have a couple of editions of the classic Cursed Earth storyline but now, next year, Judge Dredd: Cursed Earth Uncensored will be released containing the stories that were banned after their initial publication meaning they couldn’t appear in any reprints.