Oh man, the classic Challengers of the Unknown risk being dragged into the New 52 world by Pandora – can even they escape this fate?

A very quiet week, this week – but it’s quality, not quantity.

Dr Manhattan finally reveals when and how he’s been hanging around the DCU, first appearing way back in 1938 at the original first appearance of the Golden Age Superman. The rest of the issue, he talks both about the DCU timeline changes and, at the same time, discusses the fortunes of the actor Carver Colman who plays Nathaniel Dusk – clips from the Dusk films and Colman’s murder have been littered throughout the previous issues and this one makes it clear why. Manhattan, focusing on Superman and the changes to his origin story, realises that “outside forces” are changing things; these outside forces are (in-story) the Anti-Monitor and Extant, but there’s also plenty of meta-commentary about them being the Editors at DC. He labels the main DCU the “metaverse” and, out of curiosity, meddles with it by moving Alan Scott’s lantern out of his reach way back during the train crash that allowed him to become the first Green Lantern. This wipes out the JSA and, in turn, creates the New 52 DCU (while simultaneously ignoring FLASHPOINT and the Pandora character who was originally credited/blamed with creating it). And, as the issue ends, he realises he’s on a crash course with Superman.

Despite all the delays this series has had, despite the likelihood that it’s impact on the main DCU will be lessened by the time it finishes due to Geoff Johns no longer having the influence he had back when Rebirth was kicked off, this is a bloody good story and an excellent single issue. Both Johns and artist Gary Frank absolutely nail this one, and while I look forward to its ending, with Brian Michael Bendis and Tom King being Dan Didio’s golden boys these days, I really doubt there’ll be the massive impact at the end of DOOMSDAY CLOCK that was promised. I hope I’m wrong.

And talking of hope, it gets several mentions in this story and, with the recent ending of HEROES IN CRISIS and what that story does to Wally West who, in DC UNIVERSE: REBIRTH was the beacon of hope, I can’t help but think poor old Geoff Johns’ story isn’t going to make much difference in the DCU.

McGregor and Shaw continue their journey through what might be hell, with McGregor revealing a secret from his teenage years which ends with an expression of hopelessness and nihilism . . . and a possible help to Shaw.

Another excellent issue with Ennis continually subverting what you expect to happen. Two more issues to go!

I’ve never been a big fan of this whole Black Friday thing – I’m sorry to my American readers, but it’s another example of the UK hanging on to the coat-tails of our friends across the pond and making otherwise sensible people rush to stores at ungodly hours in order to pick up things that they may not actually want just because the price has been reduced.

That said, Comixology have a Black Friday sale where a whole bunch of graphic novels have been massively reduced. So I put on my Hat of Hypocrisy to drown out my own conscience and bought . . .

Batman/The Flash: The Button – with Doomsday Clock #1 landing this week, I thought it was the perfect time to pick up (and read – man, it’s a fast read) this almost prequel where Reverse Flash meets his end (again) and it became as clear as possible that Dr Manhattan was meddling with the DCU.

Harley’s Little Black Book – I’ve been picking up the trades of Harley’s main series and if this is anywhere near as much fun, I’ll look forward to reading it. 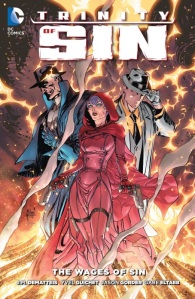 Trinity of Sin – damn you, spur of the moment! For reasons that escape me, I actually bought the Pandora series that promised (and failed) to explain why she was so important to the creation of the New 52, but didn’t bother with this series that only lasted for six issues. 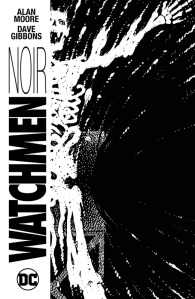 Watchmen Noir – and bringing it full circle, I picked up another version of Watchmen, this one the black and white version which, having read the first half dozen or so pages, looks absolutely gorgeous.

Each of the above was a mere £2.99; there’s plenty of other stuff in there that I might be tempted to as well.

You know, if I were one of those people who liked to pick up things that they may not actually want just because the price has been reduced . . .

Everyone enjoying the craziness that is Dark Nights Metal? Snyder did promise us a fun, over the top ride and he seems to be delivering with, among other things, issue #2’s reveal of Darkseid as a baby:

(And is Darkseid making the devil’s horns sign beloved of the late, great Ronnie James Dio or am I just seeing what I want to?)

It’s jumping around and barking mad – and I’m really enjoying it. I may get around to annotating it further down the line, although it’s a little too embedded in the Batman books for me to get every single reference, but I did want to do my public duty and offer up one thing.

On page 20, the Court of Owls and the Strigydae trap Batman in order to raise the big bad guy, Barbatos, complete with a summoning ritual:

The font that’s used has been in DC’s comics for several years – among other places, it’s turned up in Blue Beetle as the language of the scarab; it was used in Pandora: Trinity of Sin when Pandora (remember her?) cast a spell; and even as far back as Final Crisis: Requiem when it was used as the Martian language.

That’s all it says, folks. I’ll admit the question mark after BATS is a guess, but it’s not the same as the exclamation mark at the end of TONGUES.

You can thank me later.

Join 81 other subscribers
Follow Crisis on Earth-Prime on WordPress.com