What could possess the good Doctor to team up with Darkseid? Is he hoping to get help to cure the Joker? Or to improve his luck with women?

The thing about running at the speed of Flash? It’s easy to lose track of where you are.

The Flash pulls a fast one in JUSTICE LEAGUE #42

The God King Lore’s army has invaded Earth and Mikey, the Chosen One, thinks Lore is sending his werewolves to rescue the witches that Mikey and his family have taken captive. Lore has other ideas, though, and one of the first characters we met in this story comes to an end.

This series continues to be bloody good, both in terms of writing and art – seriously, it’s consistently one of the best looking books I’m getting.

Daxamites under the leadership of the Eradicator have invaded Earth and only the League stand against them. Faced with an enemy they can’t possibly defeat, the League does what it does best and shifts the battlefield, giving themselves the advantage.

Robert Venditti continues to breathe excitement and adventure into the League following the departure of Snyder and his interminable Year of the Villain storyline. Global threats that only the Leagure can stand against – this is what I’ve been missing for some time!

The JL Odyssey team are holed up with the unlikely ally the Lord of Time, who is planning to rewrite the whole of history minus the bad bits. All the League have to do is take out Darkseid’s assassins – trouble is, they missed one.

There really is little connection to the rest of the League other than the title, by now – this team operates in its own section of the galaxy, its adventures having no impact on the rest of the DCU. That said, it’s still a fun read.

Something attacks the town of Woodsburgh, forcing the people to attempt to seal it within a mine using dynamite. A stranger arrives following the attack and finds help amongst the dead. Years later, the townspeople still blame Lady Swanson for the attack, even though she lost her husband. Strangers arrive in Woodsburgh, the beautiful Lady Hellaine and her butler, neither of whom are what they seem.

Having enjoyed Mirka Andolfo’s art in DC’S BOMBSHELLS series, I thought I’d give this weird horror/Western a go and I’m glad I did. There seems to be a hint of Lovecraftian otherness about it and it looks gorgeous. Well worth picking up.

With being on holiday for a couple of weeks and having to catch up with everything, Sunday Reviews have been a bit scarce for a while. Let’s see if we can get back into it, shall we?

It’s five years later and we get to see just what Satan’s made of the place since he brought his demonic horde through. Sadie and her rag-tag crew – including Clark the Anti-Christ – have somehow muddled through before deciding to return to their childhood home where they meet someone we haven’t see for a while.

Nice to have this series back and being as fun and crazy as ever.

The League interrogate Abraham Slam and the others, while Batman and Cyborg work at getting out of the farm. Elsewhere in the Para-Zone, Colonel Weird and John Stewart view the final fate of the Flash . . . with surprising results. And Golden Gail finds a surprising ally when she breaks out of the League’s cage.

Another fine issue of this crossover – worth it for the interrogation scenes alone.

Chastity, fresh from hunting and killing some vampires, heads to an audition for a burlesque show where she finds a bunch of other actresses, all waiting for different auditions. Too late she realises the room’s drugged and the others fall asleep; when the bad guys arrive, they manage to overcome her as well.

I enjoyed Leah Williams’s work on BARBARELLA/DEJAH THORIS so thought I’d give this mini-series a go even though I knew next to nothing about the character of Chastity Jack. This sets things up and introduces her nice and quick, but it’s a bit lightweight. I guess we see where we go from here.

In order to regain their shadows, Hawkman and the Shade have journeyed to the Shadowlands to face the Shadow Thief, but the Shade recognises that something has changed within Hawkman – he’s more vicious than he’s been in a long time.

Venditti writes a good, fast paced issue with enough of a change in Hawkman to make you realise something’s off. A good issue of a solid series.

On an abandoned Zamaron space station, a small group try to summon the New Gods to go up against Darkseid but what they get is Blackfire and the corpse of Green Lantern Jessica Cruz, whom Darkseid killed at the end of the previous issue. She doesn’t stay dead for long, though, as Darkseid’s own Omega Force appears to have healed and empowered her which comes in handy when they’re attacked.

I’d be surprised if anyone thought Cruz would stay dead but she’s come back with an intriguing change. Interesting to see where they go from here, but hey – Red Lantern Dex-Starr’s joined the team! 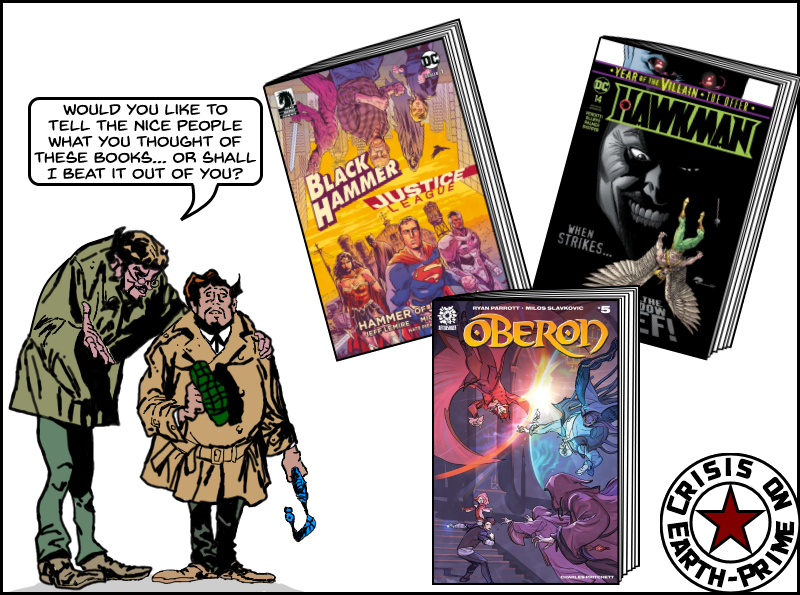 The heroes from BLACK HAMMER are introduced before being approached by a mysterious figure; in Metropolis, the Justice League are fighting off an attack by Starro before they, too, are approached by the same figure. This mystery man manages to transport the heroes from one place to another, swapping them from one world to each other’s, with the BLACK HAMMER heroes appearing in Metropolis and the League on the Black Hammer Farm. Elsewhere, Colonel Weird is found by the Green Lantern Corps.

By necessity, there’s a bit of recapping and introduction here, more for the BLACK HAMMER characters than the League, which is understandable. It’s done well and with little preamble, though, getting into the story nice and quick. While there are no surprises with this initial swap scenario, I have hopes for more from the rest of the series.

Hawkman is in Kenya, hoping to find some peace and quiet in a mystical cave at the top of a mountain but his relaxation is disturbed by the arrival of one of his oldest foes, the Shadow Thief. They fight, with the Shadow Thief revealing he has new powers and abilities, and at the end of the battle, the Thief literally walks away dragging Hawkman’s shadow with him.

This is part of the Year of the Villain event happening in DC stories where, much like UNDERWORLD UNLEASHED, villains are granted new powers in order to take on their old foes. I’m confused as to why Hawkman takes so long to recognise Shadow Thief, but on the whole this isn’t a bad issue.

As the Odyssey League feel constrained to work with Darkseid to build Sepulkore, Cyborg tries to understand what Darkseid’s doing and realises that he actually can – he shouldn’t be able to, but he can process the almost unimaginable amounts of data, much to his surprise. Darkseid isn’t surprised, though, and goads Cyborg, telling him he’s always been a machine posing as a human and that he should embrace it. The rest of the League arrive and take down Darkseid, only to find Cyborg might have taken the old god up on his offer.

Not a bad issue; this title’s come on leaps and bounds since Dan Abnett took over.

Oberon and Puck battle and Bonnie is revealed to be the Lovet, the natural magician that Oberon thought she was. The Nevermen strike and Titania plots and, at the last, Oberon shows what an absolute bastard he is and just how far he’ll go to get what he wants.

It looks like this is the end of this series which is a shame – there are multiple story threads that could continue, but unless there’s a volume two coming next, this looks to be the last issue.